by Razia | Our Work

06/06/2022 – Himaya Haven are delighted to announce that our Founding Director and CEO has received recognition in the Queen’s 2022 Birthday Honour’s list, having received an MBE for Services to the Birmingham Community. Razia is the first British Muslim Female of Kashmiri/Pakistani Heritage to receive an MBE in Sparkbrook which is in one of the top 3 most deprived wards in Birmingham/West Midlands.
Her dedication, diligence, energy, and humour have helped create a space for members of the community who often feel isolated, disenfranchised and forgotten. She founded Himaya Haven due to a determination to support and advocate for the “silent victims on the outside” – families and individuals with loved ones who are/have been arrested and imprisoned. Razia has always been a keen advocate for collaboration and encouraging different communities to join in working for the benefit of all. 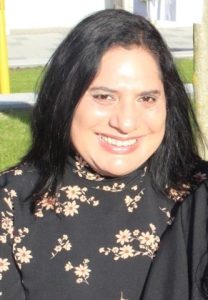 Razia has been a community activist for 24 years championing the needs of disadvantaged groups from diverse, ethnic minority communities living in the most deprived areas of Birmingham. Her achievements have been recognised through several UK awards:

Razia had set up Himaya Haven (community interest company) five years ago through which she has supported around 400 women and children (100 families) and helped them to navigate the criminal justice system, accessing counselling, debt advice and food banks. Her work has also included working with young offenders in the community by arranging mentoring to prevent them re-offending.  She has continued to work tirelessly during the Covid-19 pandemic to ensure the most vulnerable are supported. Within the last year she has raised six thousand pounds and provided food packs for families of prisoners during Christmas and Ramadan; as well as wellbeing gift boxes for 1300 male prisoners across eight prisons in the West Midlands and fifteen female prisoners from one prison.

During 2014-15, she helped set up the Sahara Safe Hub (at Small Health Community Forum), a service for victims of abuse and initiated a project to raise awareness of forced marriage, female genital mutilation, domestic violence, honour-based violence, child sexual exploitation and sexual abuse within families. Her workshops and events in colleges, schools and women’s centres included holding a ground-breaking event with South Asian male taxi drivers. As a result of her work, 900 women, men, youth, teachers, and parents were better informed about these issues so they could help to safeguard children and themselves. Examples of impact also included women who had attended the workshops calling helplines and disclosing abuse.

In 2012, she used the opportunity of the Olympic torch relay passing through Sparkbrook, Birmingham to encourage ethnic minority communities to participate in sports activities. She organised this because they had some of the poorest physical health in the city at that time.

In 2007, she engaged with asylum refugees through coffee mornings, helped them to register with GPs, involved them in voluntary work and supported them to set up a resident group. Her interventions helped to reduce their isolation and facilitate integration.

In 2003/4, Razia assisted the fire brigade in accessing ethnic minority communities living in over-crowded housing to arrange for free smoke alarm fittings and having their electric appliances safety checked. This was initiated after a fire broke out in a house causing the death of a young four your old child in Sparkbrook.

When she began her community work 24 years ago, she was the 1st Asian female to Chair the Sparkbrook Neighbourhood Forum, where she successfully campaigned for a project known as Sparkling Corners. This meant she was able to get railings installed on pavements to prevent cars from parking on corners and negotiated with the Birmingham City Council in redesigning and providing 60 bins in the local area to protect the community from littering and the appearance of rodents. The project was so successful that it was rolled out in the neighbouring area of Balsall Heath.  Her safety work helped to reduce risk of harm and potentially save lives. Her work has helped to improve the quality of life, safety, and wellbeing of some of the most disadvantaged and poorest in society.

Razia T. Hadait states: “I am truly honoured and blessed to be recognised for this award, especially in a year that has been overwhelming in its intensity and challenges.

I would like to thank my husband Tariq for his patience and my daughter Zobia for her unwavering support and encouragement over the years. My daughter in particular has been the beautiful voice saying to carry on when I was faced with discouragement.  I’d also like to say this honour is for the Himaya Haven team and the tremendous work we have achieved and continue to undertake together.

Like my South Asian female colleagues, I have experienced stigma due to the work I do – going into prisons, supporting families of offenders, has raised questions about what the norm is for Kashmiri females in the workplace. Such experiences have motivated me to do more, speak more and create a space for other likeminded women/individuals to carry the baton and support the community. Everything I have done over the years was because I wanted to help, play a role in making a difference, inspiring other females, supporting the richness of the community I was raised in, and giving space for the voices of those in the shadows to be heard.”

Founder of charity which helps families of prisoners is awarded an MBE – Birmingham Live (birminghammail.co.uk)